What Our Customers Are Saying

To find a jeweller
The journey to honour my parents memory started many years ago with an ABC radio conversation about the process of memorial diamonds in Switzerland. I was listening to this with dad in my parents kitchen & said to dad “that’s what I’m going to do with you”. Silence, but the twinkle in his eye was confirmation from my father that he approved. Death is not something talked about much in western culture though my family have a history of donation to medical science, so the “after life” was not a queasy concept. The seeds were sown and life went on and then it didn’t. The universe tends to work its own magic & I allowed just that. From the grief of losing one parent and then the next, the one constant was the logistics of turning my precious parents into diamonds. I was able to achieve this with the help of the wonderful people at Algordanza in Switzerland who showed such compassion, care & expertise . In due course mum and dad arrived home. Mum (& her twin sister) were born in Beerburrum, so the Glasshouse Mountain region has always been a place we travelled to and felt a sense of belonging. On one trip I discovered a jeweller in Montville who had designs that held great possibilities. When I finally had mum and dad back home it was time to find the designer to honour their spirit. Again the universe provided. I found Ishkhan. From the very first conversation I knew this was going to be special collaboration. Our first meeting was a bear hug and that set the tone for such an emotional and joyous creative process. We had so much fun & with Jana adding to the design stage it didn’t take long before we had the picture out of my head and into the next phase. Ishkhan wove his creative magic & I returned to Montville for the reveal. There were no words. None to describe what had been created. Tears, hugs and champagne to celebrate my parents and their journey of life and now the afterlife. Ishkhan, thank you for the fun we had in designing and for everyday from here on as I am able to see the sparkling essence of mum and dad. 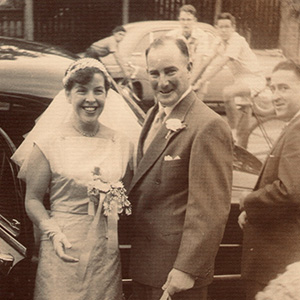 Dianne Nordish
March 2019
My wonderful husband bought me a gorgeous pair of diamond stud earrings in the Diamond district of New York 11 years ago. While beautiful, they were impractical. I found them to heavy and bulky for my earlobes… so after one or two wears they sat in my jewellery box (gathering dust). Over the years I consulted with jewellers about changing them to hooks. One said it wasn’t possible and others gave me quote that left me faint and bewildered to say the least… I recently moved to Montville and on my morning walks noticed Laurisha Jewellery’s signage about redesigning old jewellery and decided to give it one last shot. All I can say is I am so thankful I did. Jana and Ishkhan brought them to life and retained their intricate detail and charm. I’m happy to say they will no longer be gathering dust in my jewellery box. Many thanks! 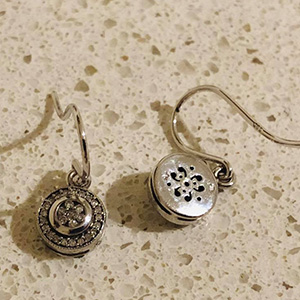 Petrina Frankham
December 2018
In 2012 my husband and I bought a property which resulted in my going from working in the beauty industry and having quite a social life to long hard days of manual labour. In 2016 I decided I should do something with some of the jewellery I no longer had the opportunity to wear. I didn’t want to sell it or give it away as it consisted of everything from gemstones prospected by loved ones who are no longer with us, to pieces I had collected in our travels all over the world. I imagined putting it all into one piece – a bangle – but who could design and create this for me from what was in my mind? My search led me to Ishkhan and his business “Laurisha Jewellery”. with his 3D technology he was able to visually show me what he was designing. it was certainly a challenge but one I could see he was eager to take on. 58 diamonds and 12 coloured gemstones later, the result is spectacular. However, the intricate gold bangle in a floral filigree is absolutely the star of the entire piece and that comes down to Ishkhan’s outstanding skill in his field. I can’t thank him enough. 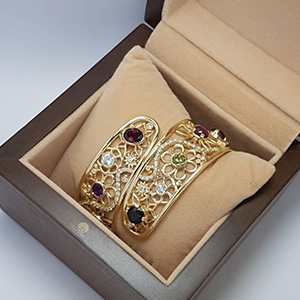 Peter and Sandy
June 2017
The history of the rose gold rings from our maternal lineage: great grandmother for Rick from Ireland and Australia and for Mary my mother’s grand Aunt from Chicago USA. The diamond: In Evanston, just north of Chicago, Rick had built a deck for a family; was paid and immediately went to Marshall Fields in Chicago to obtain a 10th wedding anniversary ring for Mary. It was set in such a way that with raising 4 little cherub children, Mary kept bumping it and bent the prongs that were holding the diamond together. Mary put the diamond ring away in a safe place, after continually trying to fix it at the jewellers, which ended up to be more often than wearing this beautiful ring itself. In 1992 the family emigrated to Australia to live in Samford, just north of Brisbane QLD. We have celebrate our 30th and 40th wedding anniversaries at Secrets on the Lake, situated in a rainforest, which gives panoramic views of the water and surrounding mountains overlooking Lake Baroon, so beautiful. While in Montville, we brought these rose gold rings and the ring with the diamond from our 10th wedding anniversary to Ishkhan. We bought a ruby from Ishkhan to celebrate our 40th weeing anniversary. Ishkhan showed us many options. Mary spotted a ring in his cabinet and immediately knew this was the one to incorporate rose gold rings, 10th anniversary diamond and ruby in honour of our 40 years. Bless Ishkhan! He listened and imagined with us together. Our gratitude forever, with all our love, 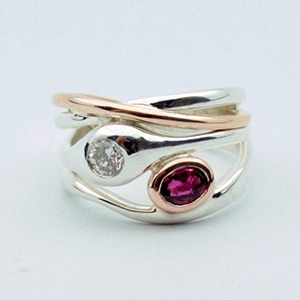 Mary and Rick Dalmau
February 2018
For our 35th wedding anniversary Ishkhan was able to source coral and create a beautiful pendantss, all at quite short notice. His attention to detail and willingness to work with and expand on ideas resulted in a wonderful piece. I highly recommend Ishkhan and Jana. 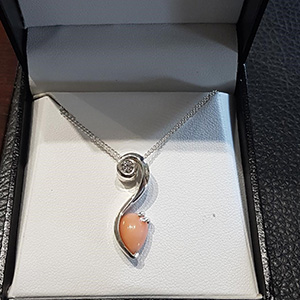 Darryl Moir
January 2018
Hello Ishkhan, It was a beautiful relaxed wedding day with close friends & family. The matching wedding rings are beautiful, Rosemary & I love them. I think you exceeded our expectation with our precious rings. Thank you. 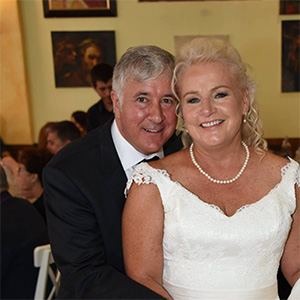 Trevor Halls
March 2019
On 20th September 2013, I got down on one knee and proposed to my now wife with the most beautiful ring. I had an idea of the engagement ring but the design advice from Laurisha Jewellery was amazing and what I thought would be a stressful process never was. We just want to say THANK YOU so much for designing and making such an incredibly beautiful engagement ring and then of course our wedding rings, they are absolutely stunning! We wanted to share with you two photos that our fabulous photographers from Filmery took on the day. The beautiful sparkles just make everything even more special!! 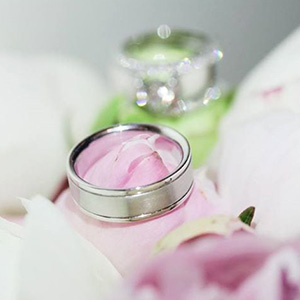 Steve Hart
September 2013
Laurisha helped me choose the perfect ring for a surprise 10th anniversary even though we’re in Brisbane. Thanks Ishkhan and Laura for professional service with the personal touch of the wrapping. 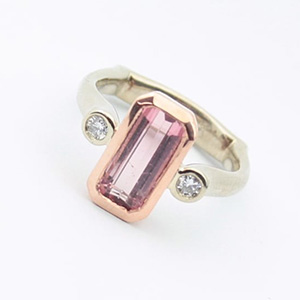 Scott Clark
January 2018
Hi, just picked up my beautiful Aquamarine and Diamond ring, my partner and I had custom made by lshkhan at Laurisha Jewellery. Absolutely stunning ring, made with our own gold we found at Clermont, Qld. While we were there, we made a trip to the Anakie Gem Festival, and bought a lovely Nigerian Aquamarine rough, and got it cut into a flawless 3 carat stone as the centre piece. Thankyou Ishkhan, really beautiful ring, we love it. 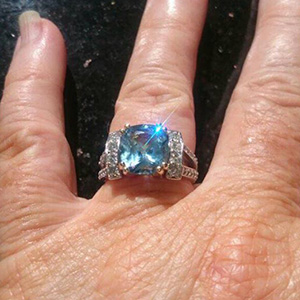 Jean and Paul
October 2017
Hi Ishkhan, I just wanted to thank you for my beautiful, beautiful ring! Jason and I got engaged last weekend on our getaway to beautiful St. Helens on the east coast of Tasmania. We are both so happy with the purchase of this beautiful ring you made for me and wanted to take the opportunity to let you know. 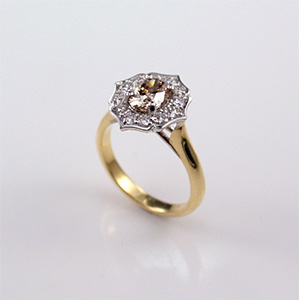 Pip and Jason
January 2019
The engagement ring designed by Ishkhan at Laurisha Jewellery for my now Fiancée, was more beautiful than I could have ever imagined. The design process was a huge amount of fun from the moment I contacted him to the time the ring was finished. Ishkhan’s attention to detail and advice was fantastic – he took my thoughts on board, listened to what I was looking for and then added his expertise and knowledge. The end result was a stunning ring we’ll treasure forever and one which made the moment we got engaged even more special. A big thank you, Ishkhan, and I look forward to you designing our wedding rings! 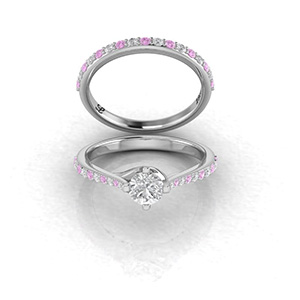 Roger Edmonds
February 2015
Thank you so much for the beautiful bangle that you made for Ian’s 60th Birthday. He just loves it. 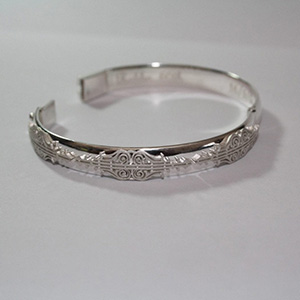 Sue Robbertson
September 2014
Much thanks to Ishkhan and all his staff at Laurisha Jewellery in Montville not only manufactured but designed a ring with challenging aquamarine for me. Ishkhan was so professional and helpful when I didn’t know what would suit. It’s stunning. 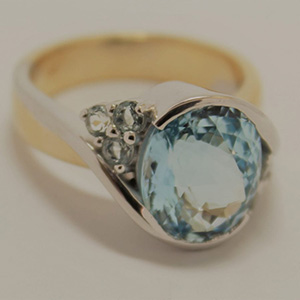 Judi Sal
January 2017
Dear friends at Laurisha Jewellery, I would like to from the bottom of my heart thank you once again for my beautiful rings. Because of your expertise and know how I can wear my rings after 10 years keeping them in the draw; because of my swollen joints I could not put them on. But now with your ingenuity of incorporating hinges, I once again can enjoy my rings. Thank you so much. 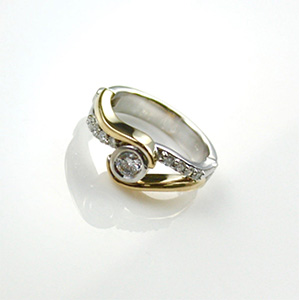 Alice Arkapaw
January 2016
My husband surprised me with this beautiful engagement ring that he bought from Laurisha Jewellery. I absolutely love it! 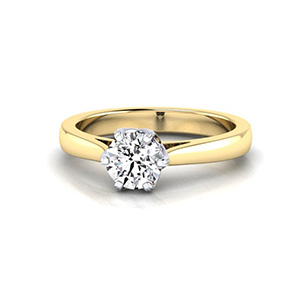 Susan M
May 2014
We provided Ishkhan a picture of an engagement ring we liked and he custom designed something even more amazing. He helped us select the perfect diamond and created the ring around. The service was top notch and we are very happy with the end result. Much better value than buying through a chain jewellery store and it’s a unique one off piece. We’ll never go anywhere else! 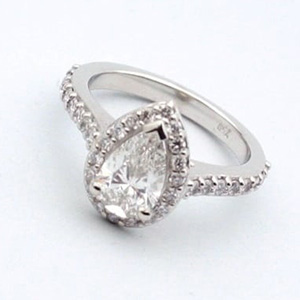 Call Us Now
Make an Appointment

Beauty to your Inbox

We value our clients and want you to stay up to date with our work and any specials.  Subscribe to our newsletter!